When it comes to food in Barcelona, we prefer to leave it to the experts. Looking for people who can master the food scene in any city is not an easy task unless you know where to look. Let me introduce you to Michael Scott-Kline, food guru and the co-owner of The Barcelona Taste, the first (and still the best) company in Barcelona specialising in food tours. He will take care of all our articles with culinary recommendations so you can have a hell of a foodie time in Barcelona. He starts with practical advice for visitors looking for gluten free in Barcelona.

Gluten Free in Barcelona? No worries

Visitors to Barcelona searching for gluten free restaurants and meals might worry that in a place famous for its pa amb tomàquet (literally “bread with tomato”, but it’s really so much more than that…) would face an uphill battle. While it’s true that many traditional Spanish and Catalan dishes do contain gluten, fortunately there are many excellent choices that do not. So which tapas should you look out for?

Well before you head out for lunch or dinner, you might want to plan-in some snacks earlier in the day. In Barcelona people tend to have lunch from 2.00pm and dinner after 8.00pm-8.30pm. It’s also worth noting that kitchens aren’t open all day. Lunch hours vary but are typically 1.30pm-4.00pm (sometimes later) and dinner hours are usually from 8.00pm. Fortunately, in many places tapas tend to be served even when the kitchen is closed for more formal dining. However, if you prefer to eat earlier than is considered standard here, you may find rather fewer options available, apart from the most basic tapas.

So, it could be wise to enjoy a large, long lunch in order to stretch to a later dinner, or stock up on some snacks that can keep you going until the kitchens are in full swing. Nowadays, nearly all major supermarket chains also stock and sell gluten free versions of popular foods. Mercadona supermarkets usually have an extensive range of gluten free foods and were one of the first in Spain to introduce this, as the daughter of the owner is a celiac herself.

When you do eventually arrive at the restaurant or tapas bar, it is always worth explaining to your waiter if you cannot consume gluten. “Sin gluten” (in Spanish) or “sense gluten” (in Catalan) will be understood. If you want to additionally specify that you can not eat anything that is made or thickened with flour you can add “es muy importante que los platos no lleven harina” or more simply “sin harina”. 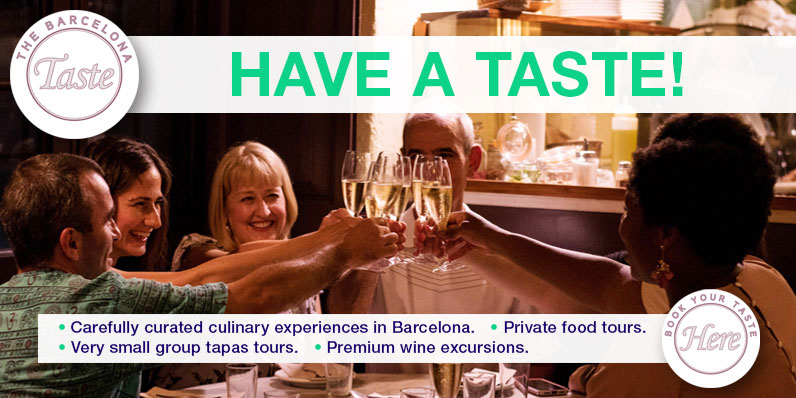 Here is a list of snacks and dishes that we have found to generally be gluten free in restaurants in Barcelona (but again, to be safe, you should always ask before you eat!):

You can also ask if they have any gluten free bread to try pa amb tomaquet (bread with tomato) as this is increasingly available, particularly in the larger most visited neighbourhoods.

It’s also worth noting that fried dishes might not contain gluten in their stated ingredients, but it is possible that they might have become contaminated by trace gluten depending on the oil being used while frying, so always double check with the restaurant (that would be the case with patatas bravas, for example).

For cured meat lovers it’s fair to say that it’s tricky with embutidos (cured meats). Jamón should always be safe, but other embutidos, if they are not handmade, may have some bread crumb as a binding agent or to absorb fat and juices.

Desserts and drinks without gluten

For dessert, if you see crema catalana on the menu (similar to a creme brûlée, but, in our view, more sophisticated with its gentle infusion of lemon or orange and cinnamon), ask if it has been thickened by wheat flour or corn flour. Often it is the latter and otherwise the dish doesn’t tend to contain any other gluten based ingredients. Other sweet treat options include:

For drinks, some restaurants serve gluten free beer, though this is still fairly hard to find. Most cavas and wines do not contain gluten, and the region produces some of the world’s best so it is well worth asking and enjoying!

What dishes to avoid if you are gluten intolerant

Over ten years of running personalised food tours, we have also learned to avoid certain dishes which almost always will contain a heavy amount of gluten. These include:

Located in the northern edge of the Raval neighbourhood and just moments from La Rambla, this elegant restaurant combining Catalan and French cuisine is one of our favourites. Everything is gluten free, and there is a fabulous large selection of wines to go along with your meal. The decor is divine. It might not be the cheapest option but you are certain to enjoy the entire experience. It is also accredited by the Association for Catalunya Celiacs.

Food from all over the world (hamburgers, pizza, delicious cheesecake…) and all gluten free. Great selection and a nice relaxed atmosphere. It is located on Avinguda Diagonal, between Eixample and Les Corts neighbourhoods. Accredited by the Association for Catalunya Celiacs.

A Indian restaurant in Barcelona with excellent gluten free options. The staff is super friendly and very aware of food intolerances: they’ll help you out. Fast service, affordable options and a menu that is regularly refreshed throughout the year.

A  high-quality bakery in the neighbourhood of Gràcia where you will find bread, pastry, gelatto and fresh pasta. All gluten free and almost all of it 100% vegan. Accredited by the Association for Catalunya Celiacs.

A Chinese restaurant in the Eixample neighbourhood with some truly delicious gluten free options, like the ravioli filled with duck and foie. Accredited by the Association for Catalunya Celiacs.

A short walk from Plaça Catalunya, this popular vegetarian restaurant swells up ever day (at lunch time in particular) but has very efficient and professional service. Many vegan and gluten free options, a polished but buzzy atmosphere and excellent food. They also sell a cookbook so you can recreate the yum at home!

Nutritional coach Anna Edo also has a great list of places for celiacs on her article about gluten free restaurants in Barcelona. The post is in Spanish but it includes a link to each restaurant website for more information. Also, if you are travelling to Madrid, check out our our friends advice for gluten free Madrid.

For small, personalised food tours in Barcelona you can of course also get in touch with us at The Barcelona Taste.

Casa Batlló and kids are inseparable! Spark their

Visiting the stunning Montjuïc Cemetery. ⠀It's

Can you guess which one of our guides is the Barç

We never get tired of Barcelona's beautiful artwor

Remembering some of our private tours in Barcelona

This is the cute 1-floor single house in our barri

Ready to enter Gaudí's Casa Batlló to enjoy the