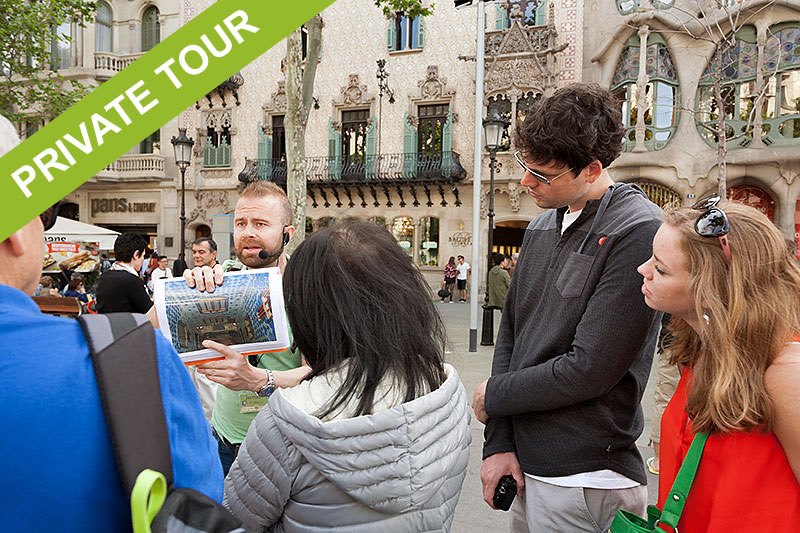 Of all the architects that helped shape Barcelona at the turn of the century, Antoni Gaudí is the most well renowned. On this tour we introduce you to his life and works while seeing the façades of four of his most striking constructions. The perfect way to discover Gaudí and decide which buildings you might like to visit in your own time.

Price does not include transportation (taxi or public transport).

Plaça Reial (by the water fountain). We can also collect you at your hotel if it is located near the attractions we visit.

"We took a Gaudi private tour and it was lovely! Tati was very well informed, vivacious, fun and awesome guide. She not only walked us through Gaudi's life and works but also was a delight to talk to on other topics."Read on Trip Advisor

"This was an excellent way to see Gaudi's works with a family - we are three generations and with diverse interests. Ann-Marie was engaging, enthusiastic, and knowledgeable. We booked this as a private tour with the specific request that the tour be tapered to our diverse group. And it was exactly that and more."Read on Trip Advisor

WOULD RECOMMEND THIS TOUR COMPANY

"Took a private Gaudi Walking Tour, with Miguel as our tour guide. A great couple of hours+ learning lots of interesting facts about Gaudi and Barcelona."Read on Trip Advisor

Plaça Reial (by the water fountain)

We can also collect you at your hotel if it is located near the attractions we visit.

Nearest metro stop: Liceu (L3). Take the the exit named “Sortida: Liceu” and walk down La Rambla towards the sea (the main Opera House will be on your right). After 2 minutes you will see a Kentucky Fried Chicken on your left. Take the next left into the square (Plaça Reial).

Our friendly guide will be waiting by the fountain in the middle of the square wearing a bright green vest and a name tag.

It has been a traditional meeting place in Barcelona since it was built in the XIX century. But this is not the only reason why our tour starts here. A young Gaudí has left some illuminating work in the square.

The first project for Gaudí’s patron and his first masterpiece. Situated in the midst of the old city, Palau Güell shines out amongst the surrounding buildings. Find out about Gaudí’s beginnings as an architect and his unusual approach to the design of the house.

Three architects compete for the most striking building in the block. Known as “La Manzana de la Discordia” (Block of Discord) by local Barcelonans, we let you decide which one is your favourite of these architectural masterpieces.

It has been called “a fairytale in stone” and “the house of yawns”. Today, nobody doubts that Casa Batlló is the architect’s most magical building. From knights in shining armour to traditional festivals, all is included in Gaudí’s imagination.

Designed by Idelfons Cerdà in the middle of the 19th century, the Eixample was the new playground for the bourgeoisie of the time. Here you will find the modern shops and restaurants but also the great masterpieces of the Modernisme architecture.

Gaudí’s masterpiece. A raw sculpture carved and moulded into Passeig de Gràcia. Offensive at the time, abandoned to its destiny and recovered to its grandeur, Casa Milà was a very troubled commission that included not only fights and court cases but also a few subtle acts of vengeance by its creator.

The unfinished temple, Gaudí’s obsession and the symbol of a city. The Sagrada Familia is like a storybook that is missing many pages. Find out about the temple’s past, present and future and hear about the architect’s tragic end. Our tour finishes here with the hope that someday you’ll see Gaudí’s dream realised.

Runner Bean Tours is certified with the Biosphere Sustainable Lifestyle for Commitment to Sustainable Tourism. This is awarded to a few tour operators who are committed to responsible and environmentally-friendly management, culture, decent working conditions, gender equity and social and economic benefits. Certificate number: BAT 004/2022 RTI.

On our tours, we are always sure we respect the local neighbourhoods and we only collaborate with small Barcelona businesses which help support the local economy.

Runner Bean Tours also holds the WTTC SafeTravels Stamp. This was created for travellers to recognise destinations and businesses around the world which have adopted the SafeTravels health and hygiene global standardised protocols.

Have a positive impact in Barcelona

We use cookies on our website to give you the most relevant experience by remembering your preferences and repeat visits. By clicking “Accept”, you consent to the use of ALL the cookies.
Do not sell my personal information.
Cookie SettingsAccept
Manage consent

This website uses cookies to improve your experience while you navigate through the website. Out of these, the cookies that are categorized as necessary are stored on your browser as they are essential for the working of basic functionalities of the website. We also use third-party cookies that help us analyze and understand how you use this website. These cookies will be stored in your browser only with your consent. You also have the option to opt-out of these cookies. But opting out of some of these cookies may affect your browsing experience.
Necessary Always Enabled
Necessary cookies are absolutely essential for the website to function properly. These cookies ensure basic functionalities and security features of the website, anonymously.
Functional
Functional cookies help to perform certain functionalities like sharing the content of the website on social media platforms, collect feedbacks, and other third-party features.
Performance
Performance cookies are used to understand and analyze the key performance indexes of the website which helps in delivering a better user experience for the visitors.
Analytics
Analytical cookies are used to understand how visitors interact with the website. These cookies help provide information on metrics the number of visitors, bounce rate, traffic source, etc.
Advertisement
Advertisement cookies are used to provide visitors with relevant ads and marketing campaigns. These cookies track visitors across websites and collect information to provide customized ads.
Others
Other uncategorized cookies are those that are being analyzed and have not been classified into a category as yet.
SAVE & ACCEPT