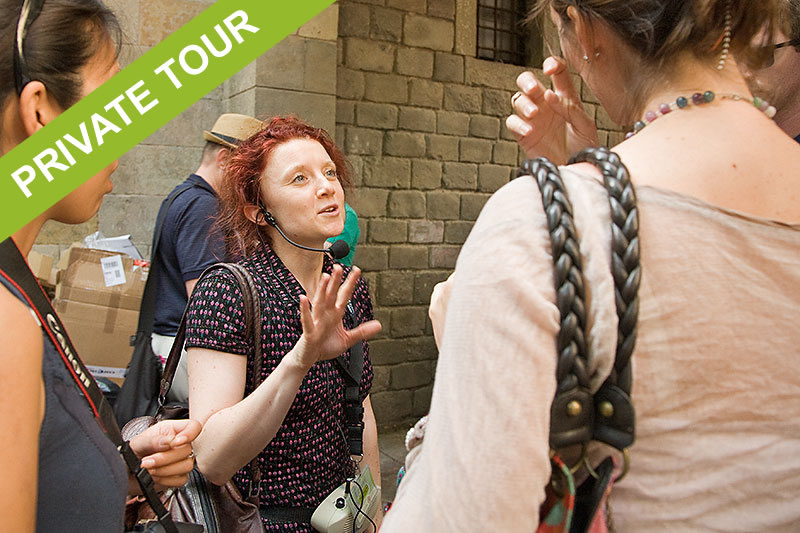 A walking tour in the charming streets and squares of the oldest part of Barcelona. The Gothic Quarter is filled with 2,000 years of history, fantastic legends and beautiful 100 year old shops. This is our recommended introduction to the city!

Plaça Reial (by the water fountain). We can also collect you at your hotel if it is located near the attractions we visit.

"Our tour guide, Lowri, was probably the most interesting, entertaining, and engaging of any of our tour guides that we had for the whole 24 days! We loved everything about our tour with her."Read on Trip Advisor

"Eric was an outstanding Gothic Quarter tour guide - knowledgeable, engaging, intelligent, and patient. Our family of three (two adults + one teen) learned so much from him; he clearly loves Barcelona and wants to share its highlights with others. Scheduling with Gorka ahead of time via email couldn't have been easier."Read on Trip Advisor

THE ONLY WAY TO "SEE" BARCELONA

"We chose private tours run by locals because we wanted to contribute to the LOCAL SMALL BUSINESS COMMUNITY rather than pay mega-corporations. We also wanted more personal interaction - being able to ask questions when we wanted. We are SO GLAD we did our tours with just the four of us and were all EXTREMELY HAPPY with the results."Read on Trip Advisor

Plaça Reial (by the water fountain)

We can also collect you at your hotel if it is located near the attractions we visit.

Nearest metro stop: Liceu (L3). Take the the exit named “Sortida: Liceu” and walk down La Rambla towards the sea (the main Opera House will be on your right). After 2 minutes you will see a Kentucky Fried Chicken on your left. Take the next left into the square (Plaça Reial).

Our friendly guide will be waiting by the fountain in the middle of the square wearing a bright green vest and a name tag.

Only a step away from the busy “Las Ramblas”, this square is certainly one of the most picturesque in Barcelona. Some of its bars and restaurants hide secrets that will be revealed by the guide.

A beautiful square in the middle of the Gothic Quarter with the XIV century Santa María del Pi church and some of the most beautiful sgrafittos in the city. If tasting some local delicacies is what you are after, you will find them in its outdoor food market.

Not only the oldest part of the Gothic Quarter but also one of the most intriguing places in Barcelona. Walk through narrow passages and past ancient houses following the hidden clues to find out what happened to a thriving Jewish community.

This has been the centre of political life in the City for over 2,000 years. Today, the main government buildings dominate the square. Many festivities in Barcelona start or end at this place so maybe you will be lucky enough to see some of the Catalan traditions performed here.

Façade of the Cathedral

Situated in the traditional spiritual centre of Barcelona, “La Seu” is one of the most impressive cathedrals in Spain. Its XV century cloister has been called “the loveliest oasis in Barcelona”. Thirteen geese dwell in the courtyard reminding us of a barbarous crime.

The only drawback of Plaça Sant Felip Neri is to actually find it. Hidden at the edge of the Jewish Quarter, you will feel as if you are in a small village, miles away from busy Barcelona. A favourite with filmmakers, this peaceful place also has a few tales to tell the visitor.

Roman heritage is all over Barcelona, its impressive city wall appearing in the strangest of places. But there is much more than just the wall: a Roman treasure from the first century B.C. is waiting for you inside the patio of an apartment block!

Stepping into this square is like travelling back through time to when the count-kings lived in its medieval Royal Palace. King Ferdinand, Christopher Columbus and the Spanish Inquisition all have something to say in this plaza.

It has been called “the Cathedral of the Sea” and from the outside you would never guess the magnificence that is waiting for you inside. A masterpiece of the Catalan Gothic and a delight for the eyes.

Runner Bean Tours is certified with the Biosphere Sustainable Lifestyle for Commitment to Sustainable Tourism. This is awarded to a few tour operators who are committed to responsible and environmentally-friendly management, culture, decent working conditions, gender equity and social and economic benefits. Certificate number: BAT 004/2022 RTI.

On our tours, we are always sure we respect the local neighbourhoods and we only collaborate with small Barcelona businesses which help support the local economy.

Runner Bean Tours also holds the WTTC SafeTravels Stamp. This was created for travellers to recognise destinations and businesses around the world which have adopted the SafeTravels health and hygiene global standardised protocols.

Have a positive impact in Barcelona

We use cookies on our website to give you the most relevant experience by remembering your preferences and repeat visits. By clicking “Accept”, you consent to the use of ALL the cookies.
Do not sell my personal information.
Cookie SettingsAccept
Manage consent

This website uses cookies to improve your experience while you navigate through the website. Out of these, the cookies that are categorized as necessary are stored on your browser as they are essential for the working of basic functionalities of the website. We also use third-party cookies that help us analyze and understand how you use this website. These cookies will be stored in your browser only with your consent. You also have the option to opt-out of these cookies. But opting out of some of these cookies may affect your browsing experience.
Necessary Always Enabled
Necessary cookies are absolutely essential for the website to function properly. These cookies ensure basic functionalities and security features of the website, anonymously.
Functional
Functional cookies help to perform certain functionalities like sharing the content of the website on social media platforms, collect feedbacks, and other third-party features.
Performance
Performance cookies are used to understand and analyze the key performance indexes of the website which helps in delivering a better user experience for the visitors.
Analytics
Analytical cookies are used to understand how visitors interact with the website. These cookies help provide information on metrics the number of visitors, bounce rate, traffic source, etc.
Advertisement
Advertisement cookies are used to provide visitors with relevant ads and marketing campaigns. These cookies track visitors across websites and collect information to provide customized ads.
Others
Other uncategorized cookies are those that are being analyzed and have not been classified into a category as yet.
SAVE & ACCEPT