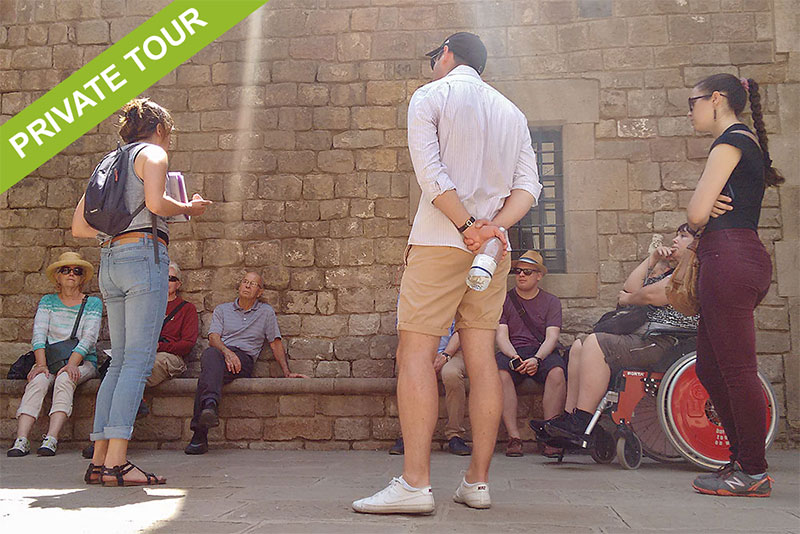 A fascinating historical voyage through the local streets of El Raval into the life of Barcelona before the Spanish Civil War. An influential period that helps explain what happened to Spain in later years. Not to be missed by history buffs or anyone who wants to have a deeper understanding of this dynamic city.

"Catherine's infectious enthusiasm for the subject matter made this a truly fascinating tour." Read on Trip Advisor

"Catherine was Brilliant again, with a great understanding of the topic, and brought a great atmosphere to the tour." Read on Trip Advisor

"We found it really helped our understanding of where Spain is now, and provided insights that enhanced our enjoyment of the subsequent civil war tour. " Read on Trip Advisor

"Catherine put together a fascinating 100 year history you will not find in the guide books, of the city's poor and how they rose." Read on Trip Advisor

WE WERE TAKEN ON AN HISTORICAL JOURNEY

"Catherine didn't bury us in facts and dates - simply told a story that put it all in context. A most rewarding and enjoyable tour" Read on Trip Advisor

(under the clock tower of the university building)

Your guide will be Catherine and she will be waiting under the clock tower of the University building (left tower) holding a yellow umbrella.

In the 1850s a plan was proposed for Barcelona to remove its medieval wall; allowing for rapid growth and better organization of the city, in what was to be a new inter-class living space.
The proposal never became a complete reality. By the end of the 19th century, the upper classes migrated steadily towards the Eixample, leaving the working class in the increasingly miserable conditions of the Old City.

By the 19th century Barcelona had become the first industrialized city in Spain. It was not a smooth transition, however. On a national level, three civil wars during this period caused great political unrest. On a local level, the medieval wall surrounding the city resulted in stunted industrial development.

It is the neighbourhood of El Raval where this class division was felt the most. Deplorable factory conditions were only matched by worsening living conditions, as homes were continuously subdivided to accommodate a growing working class population. Disease, illiteracy, abysmal wages, no laws governing workers safety or job security – are but a few of the factors that would impact on the escalating working class frustrations.

The misery and frustration of the working class would find relief when an introduction to Anarchism arrived to the neighbourhood in 1869 – the idea of living in a classless, stateless society would become ingrained amongst the workers. For the next few decades, however, Anarchism would manifest itself in violent attacks across the city.

The new bourgeois & rebirth of Catalan culture and identity

Enjoying the profit generated from the Industrial Revolution the bourgeois planned to project Barcelona as the ‘Paris of the south’. A Universal Exhibition to rival that of the French capital was organized in 1888, coupled with the desire to create a unique architectural style to relive the glorious past of the Catalan region and to showcase local talent – Modernisme.

With the loss of Spain’s last colonies in 1898, the industrial progression of Barcelona’s bourgeois was greatly affected. The loss resulted in many factories being shut down – these abandoned spaces would now be used by the proletarian to hold clandestine meetings. Anxieties continued to grow amongst the elite as they saw the neighborhood as the ‘underbelly’ of the city.

By the turn of the century changes were on the horizon for the working class in Barcelona. They began to organize in a more non-violent approach to Anarchism; replacing the attacks of previous decades with boycotts, strikes and protests. The efforts were met with constant repression, which in turn served to strengthen the plight of the workers.

Burning of convents and monasteries (1909 Tragic Week of Barcelona)

What began as a planned general strike and demonstration against conscription for the colonization of Northern Morocco descends into a citywide uprising. The church of San Pau del Camp is one of dozens to be attacked as the fury of the city’s population results in a week of destruction and havoc.

In 1910 worker’s organisation is taken to another level with the formation of a national Anarcho-syndicalist union, the CNT. Constant growth and networking amongst its members leads to the greatest labour victory in Spanish history to date in 1919 – a step closer for the worker’s to their dream of a revolutionised society.

Is this a tour about the Spanish Civil War?

No. The tour covers the period just before the Spanish Civil War, from 1835 until 1936. It is a crucial and fascinating period in the history of Barcelona and Europe to understand what happened after.
For a Spanish Civil War Tour we recommend our friend Nick Lloyd (please see our Friends and personal recommendations page).

Do you I need to make a reservation?

Yes. Reservations are essential as the number of participants is limited to 15. Also, occasionally it can happen that no one has booked for a certain date so there will be no guide at the meeting point.

What if I arrive late to the meeting point?

For respect of other participants, the tour will start on time. If you arrive late and the tour has started, you can join it at the the first stop (the garden inside the University building).

Is there a lot of walking involved?

The tour is 3 hours and there is a bit of walking involved. Nothing too strenuous but not recommended if you have mobility issues.

Is the tour wheelchair accessible?

Yes but please let us know at the time of booking so the guide can be prepared.

What if it rains?

Our Walking Tours run in all kinds of weather. In the case of heavy rain the tour will run as usual so please bring suitable rain gear.