Barcelona loves Summer celebrations. The annual Gràcia Festival is, together with La Mercè Festival in September, one of the main ones of the city. Every August, the streets of this charming neighbourhood change colour and it welcomes visitors to its delightful squares. In 2019 it will take place from the 15th to the 21st of August. I have summarized the best of the Gràcia Festival 2019 so you can stop researching and enjoy the celebration.

There are way too many things to do in Gràcia during the festival: you can join a parade, watch modern dance, listen to some rock band or even participate in a treasure hunt. The best way to enjoy it is by strolling around and being surprised at every corner. However, there are some activities you definitely shouldn’t miss.

Walk through the decorated streets

The one thing that sets the Gràcia Festival apart from any other in Barcelona is its decorated streets. For months, the neighbours spend hours preparing these wonderful creations made with recycled elements. You can see a giant dinosaur, enter the world of Alice in Wonderland or just travel to an underwater paradise. Want to know what they have prepared for us in 2019? I have prepared a handy Google map to find where all the decorated streets will be. Remember that in the late afternoon it gets quite busy so the streets will be only one way. Prepare your own route and tell us which one is your favourite this year.

Don’t focus only on the streets. There is also a competition for the best-decorated balcony! It is the turn for each neighbour to display their imagination.

OUR TIP: visit the streets at twilight (when the lights of the decorations are turned on) and early in the festival as, unfortunately, some of the creations will be damaged after the long rowdy nights.

Enjoy the liveliness of the street parades

You can find parades anywhere in the world but in Catalonia they are something special. Here you will see giant figures, people with big heads, dancers with sticks, dragons, devils and blunderbuss firing. These are the “gegants”, “capgrossos”, bastoners”, “dragóns”, “demonis” and “trabucaires” that can not be missed on any Barcelona festivity. During the Gràcia Festival there are 5 parades to choose from.

OUR TIP: the one parade  you shouldn’t miss is the “Cercavila de Festa Major”, on the first day. Here is where you will see all the different characters, from the giants to the noisy “trabucaires”.

Marvel at the human towers (“castells”)

This is one of the main events of the Gràcia Festival and a world-famous Catalan tradition. Groups of very dedicated people will climb on top of each other to form a human structure known here as castell or human tower. The brave participants are called castellers. Although the main day is on Saturday (including castellers from other areas), you can see training on the main square for some evenings beforehand.

There are many different types of human towers depending on the height, number of people on each floor or even the way that it is constructed. But I am sure you won’t expect them to also walk. This is exactly what will happen in the Gràcia Festival on Friday. The pilar caminat (literally, walking column) is formed by 4 castellers on top of each other plus a supporting base of people. Together they form a column that walks from one square to the next.

OUR TIP: if you want a very close experience, arrive early and hang around the castellers. You might be asked to help pushing and help a bit on the building process.

This is one of the staples in any big Barcelona festival. Dozens of people dressed as devils will take their huge papier-mâché dragons out and parade them around the streets. What makes the event more spectacular is that sparkling fireworks are thrown on the air and towards the crowd by the devils. If you like noise and fire, this is one that you can’t miss.

Are you travelling with children? I am sure they will love the fire run but, for the younger ones, there is also a children’s correfoc, not so… challenging.

OUR TIP: if you are going to be close to the correfoc, wear cotton clothes and be sure you don’t mind being “sparkled” a bit.

Check out this video of a Fire Run in Gràcia to give you a sense of what it is like to be caught up in the middle of a correfoc. Don’t miss the last minute when they take out some of the beasts from hell! Not for the faint hearted 😉

Dance the night away at the many live concerts

Most of the decorated streets and squares will have live music until late at night. There is music for every taste, from folk, rock or hip-hop to “habaneras”. This is a very Catalan tradition brought directly from Cuba  and always enjoyed with a glass of burnt rum.

OUR TIP: Walk from stage to stage to check what live music you like and don’t forget to have a mojito each time to refresh in the summer Barcelona heat.

…and to not miss anything of the Gràcia Festival 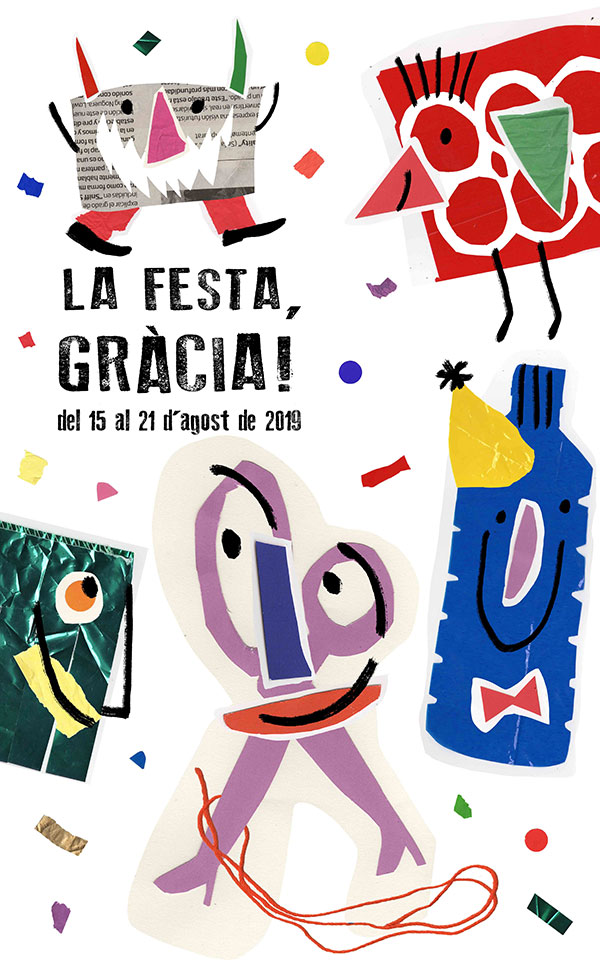 For a day to day schedule of all the activities, you can also visit the official website of the “Festa Major de Gràcia 2019”. In Catalan only but a good online translator will do the trick.

And to plan your visit on the go, you can download the app of the festival:

I hope that, if you are lucky enough to visit Barcelona on these dates, you enjoy this very special free activity. Don’t forget that our scheduled walking tours are not affected by the festival and they will be running every day. Also, if you are here for a few days, don’t forget to check our complete article with things to do in Barcelona. Have a fantastic time!

At Park Güell during a private tour with Dani. To

Having fun at La Mercè Parade. This year, in Pass